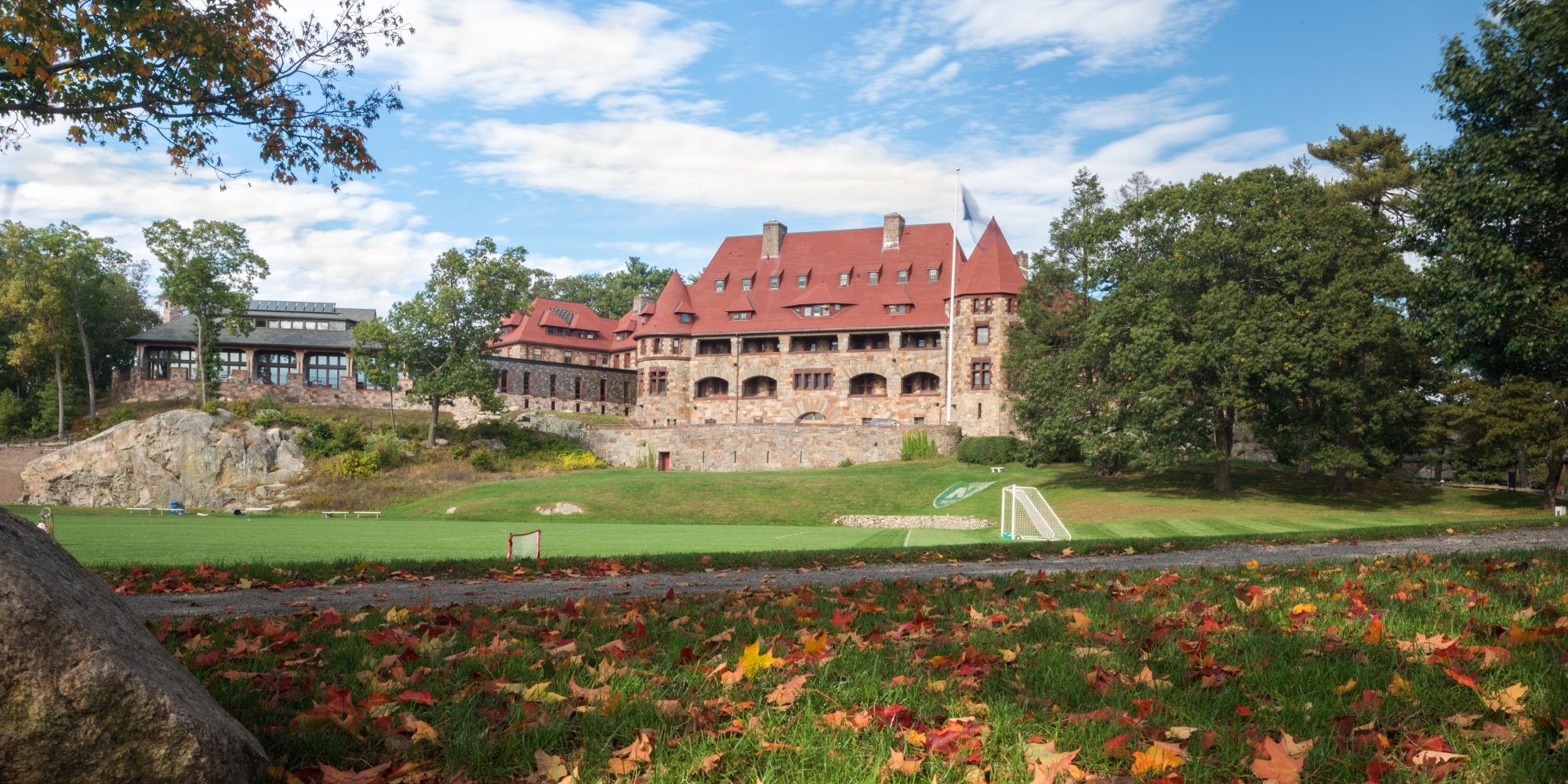 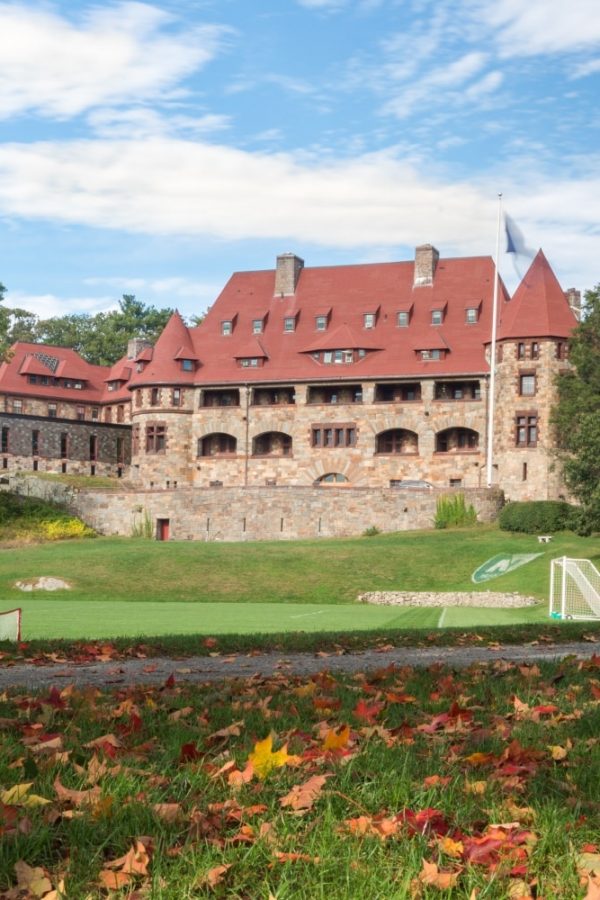 Nobles engaged Development Guild DDI as its counsel partner for its most recent campaign, Be Nobles Bold. The campaign recently closed at $138 million, surpassing goals that were exceeded and raised during the effort. This highly successful campaign provides a snapshot into the future of independent school fundraising. Read on to discover the impactful strategies Nobles employed to raise more dollars than any other independent day school in the surrounding area and grow the impact of their philanthropy program.

Nobles ‘broke’ their larger campaign goal into a series of incremental goals that motivated particular prospects and took great care to illustrate how support would have a tangible result. For instance, to kick off their campaign Nobles began with a $20M initiative to renovate its iconic Castle, a beautiful and historic building that housed the dining hall as well as teachers and boarding students. The renovation of the Castle enabled the school to declutter a complicated daily schedule (they could only fit 200—out of 600 students—at a time into multiple lunch cycles), achieve energy goals, and—given the enthusiasm that early fundraising encouraged—add an incredible and distinct dining hall complete with outdoor setting for the student community. It changed the face of Nobles’ physical facilities and set the stage for what would eventually become additional and new capital projects. Soon after, Nobles began educating its donor community about its business plan and the ways in which endowment facilitates excellence and choice. This was a new way of presenting endowment that, together with a strong investment plan, motivated donors to grow endowment to $150 million placing it comfortably within its peers – another “goal within a goal.”  Close to completion of the campaign, another fairly unprecedented opportunity presented itself when the longstanding and greatly respected Head of School announced his retirement. Very quietly, Nobles raised the dollars that would endow the Head of School position at $12M. And, alongside the Head’s announcement was a project that he very much wanted to see through, not just as a legacy to the school but because he believed it would transform the programming at Nobles. So, again Nobles set a “mini goal” to construct the Academic Inquiry Center, a 20,000 sq. ft. gathering space for the entire school with a new library, reading rooms and 6 new classrooms. By using this concept of mini goals, Nobles achieved a big goal, while simultaneously providing their community with a multitude of opportunities to see and enjoy the campaign’s impact while it was still on-going.

Historically, campaign planning has assumed one commitment per donor over the life of a campaign. Since the recession of 2008 and 2009, norms have changed; many donors feel more comfortable making smaller and more frequent commitments over the life of a campaign – if asked.  Nobles used this strategy very adeptly and outwardly with donors, mapping their aspirations while recognizing that a donor may wish to make incremental commitments as time and progressed accrued.  Nobles received a significant number of second and even third commitments from top donors.

When it Comes to Staffing, Take a Risk

Campaigns today are far more staff driven (and volunteer supported) than yesteryear. They can only succeed with committed, talented staff, and sometimes, that requires a fair degree of creativity and calculated risk – and a healthy eye on retention. Over the life of its campaign, Nobles invested in bringing on a number of alums taking on advancement work for the first time. Of the six outward facing fundraisers on the staff, five had worked in other industries before advancement. The Director of Development, for example, left behind a law career to return to her alma mater and put her class agent role to new and great use. Today she oversees the frontline team and is a great asset to Nobles. At the same time, a former teacher and alum joined as the Director of Graduate Affairs.

And Nobles didn’t forget retention! There was thoughtful attention on the school’s part to retaining and growing the Director of Development into their Chief Advancement Officer and other such decisions that had enormous impact on the outcome of the campaign.  In sum, creating career paths allowed Nobles to succeed and to emerge from the campaign with a solid team still in place.

The Results of the Campaign 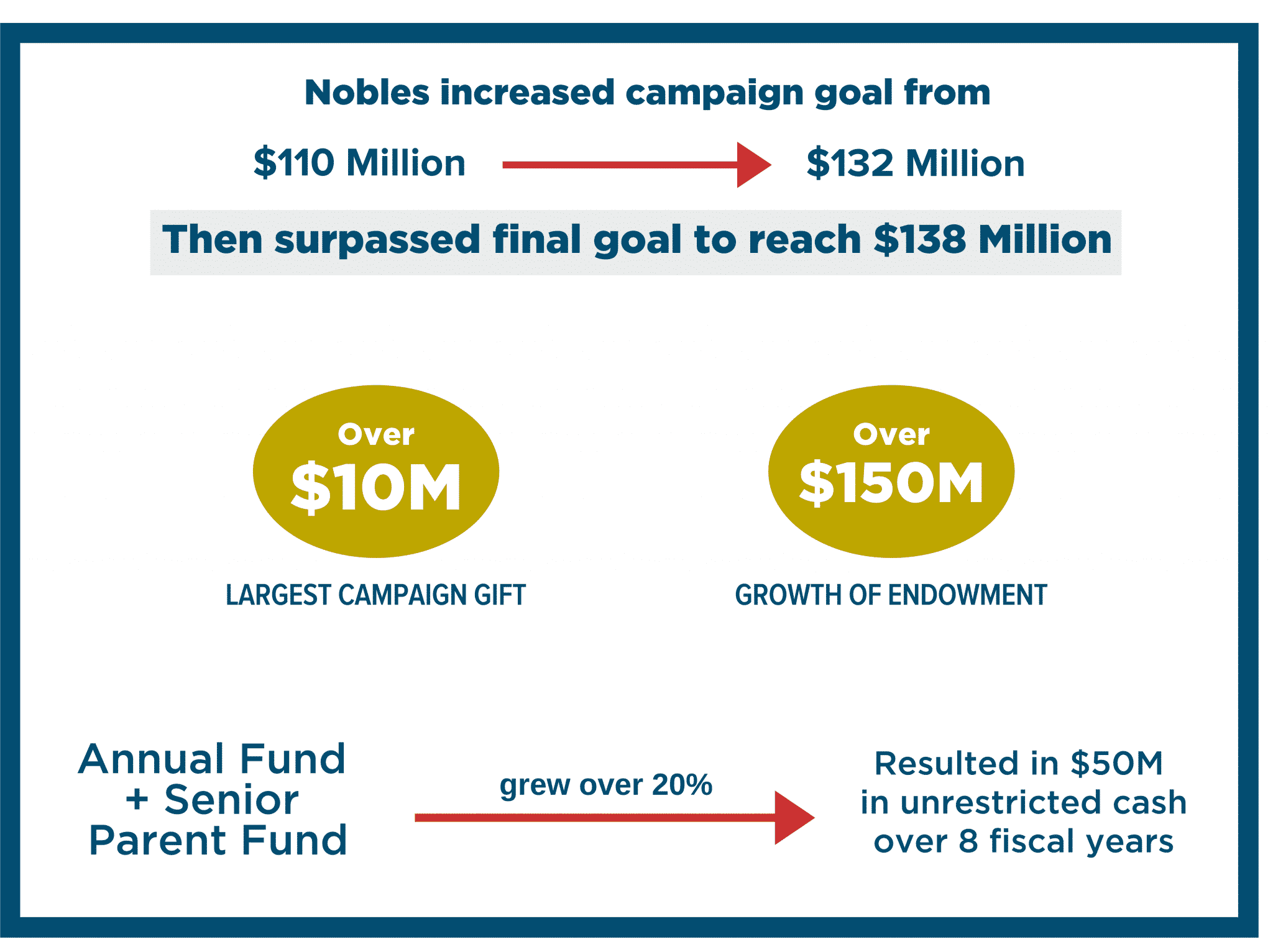 Anniversary Campaigns: Yes or No?

The success of the Be Nobles Bold campaign reached far beyond fundraising.  Nobles’ sesquicentennial ran parallel to the campaign, most decidedly providing a useful backdrop, but not hardwired, to the campaign. Nobles allowed the milestone and the associated events to have a life of their own and truly engaged individuals with regard to their history and involvement with the school and without regard to the level of their giving. Yet, it both provided and offered wonderful opportunity to draw the Nobles community closer and most definitely drew out the affection and respect held for the school and its leaders. The proof was at the celebration honoring the campaign—not an anniversary event—that saw greater attendance than any event in the School’s history.