In this month’s At the Helm, our CEO Suzanne Weber sat down with Dee Dee Mozeleski, a senior leader at the City College of New York. Suzanne and Dee Dee discuss achieving stability and success during turbulent times, the important role the foundation plays in supporting the college’s future, and City College as an agent of social change.

Suzanne: You have three titles: Executive Director of the City College Foundation, Vice President of the Office of Institutional Advancement and Communications, and Senior Advisor to the College President. How do these multiple roles support each other? 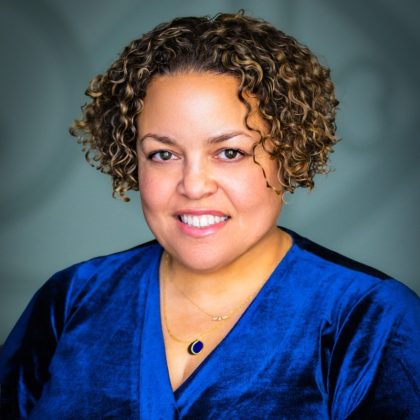 Dee Dee: I’m a bit of an anomaly. None of my predecessors carried the title of Senior Advisor to the College President, and none carried the dual title of Advancement and Communications. In a lot of ways, that meant that the two offices—advancement and communications—didn’t have a natural opportunity to collaborate. I think bringing them together under one title has truly helped us all think about the college, its growth, and its narrative arc in a more unified way.

Being Senior Advisor to the president has also helped our entire team. I’m given great insights into the successes and challenges of the college as a whole, and I try to share that with our team when I can. It’s allowed us to get ahead of challenges and address them head-on.

So, while having those three titles might sound burdensome, I think it’s created stronger collaboration and continuity – and I like to think it’s made everyone’s jobs easier, too!

How do you manage this complex set of responsibilities?

I’m extremely fortunate to have a wonderful team. They’re very protective of my time and the college, and they roll with every punch. They step up without me ever having to ask. This allows me to focus my attention on responding to crises or closing a gift or supporting the president – because I know I have the support to do so.

Our foundation staff came together under the intense circumstances of the pandemic as a small team, and we have since grown to over 50 members. During such a difficult transition, our relationships could have been challenged. But in fact, we’re a closer team today than we were two or three years ago. That’s a real mark of how professional and dedicated everyone is.

So much has changed over the past two years, including the higher education landscape. What is on the horizon for City College?

City College, along with New York City as a whole, is going to emerge post-pandemic rebuilt and committed to addressing a myriad of issues that we never had to consider before, including:

I have heard you say that commitment to addressing society’s greatest challenges is what initially drew you to your first position at City College, where you joined the Colin Powell School for Civic and Global Leadership. Can you share more about that role?

12 years later, I still feel the same gratitude and disbelief that I was the one selected for that job. It was a big moment for me. I know part of the reason I was selected was because I said during my interview, “If you’re looking for someone who can provide a quick fix to the school’s challenges, that’s not me. But if you’re looking for someone who will be making decisions based on where we want the school to be in 100 years, that’s me.” General Powell resonated with that, and it was one of the great joys of working with him. He truly changed the trajectory of my career.

He also convinced my daughter to transfer from Penn State to City College. They met at an event we held, and he said to her, “Why aren’t you attending our college? It’s the best place for you.” The next day, she decided to transfer. Watching her navigate this transition, experience student life on campus, and succeed to the point where she’s now pursuing her Masters – it’s a gift I didn’t even know I wanted. Having those insights into the student experience has changed how I think about our team’s and our college’s purpose as a whole.

The last time President Vince Boudreau and I saw General Powell, he shared that he was thrilled by how much the college had changed in the past five years – but he also cautioned us against taking on too much and not allowing ourselves the time to celebrate our successes. It’s something I think about every day.

What is top of mind for your community right now?

I have said this a few times to my colleagues – over the past two years, we haven’t had a moment to assess ourselves. We have just been focused on keeping everything afloat. So as people started to return to campus this past semester, we have been thinking about how we move forward towards the future we want.

We’re also a place where budget is always top of mind. We’re in a much better position than we were 10, 20, or 30 years ago. Enrollment numbers are changing drastically, and it’s important that we continue to position ourselves as the best possible place for students. We’re all thinking about what student success means and the outcomes we want to help them achieve. That’s a consistent thread in the work of everyone at City College.

The success of your students while enrolled and after graduating is a hallmark of the City College education. What do you attribute to this accomplishment?

City College is a place where race and gender aren’t demarcated against success. Young African American, Latino, and Caucasian students arrive here often on a different footing—in terms of their backgrounds and academic performance—and yet they all leave with equity because of their experience here. That’s a big deal, and that isn’t the case at many other colleges.

Another key factor in this outcome is the nontraditional paths that some students take to arrive at City College. We have a program called Seek that is just over 50 years old and is focused on providing financial and academic support to qualifying students based on income and academic criteria. Our Seek scholars are beginning to graduate as valedictorians and salutatorians in equal measure as students who came here with a 4.0 GPA in high school. That exemplifies the mission of City College and what sets us apart: we are a great equalizer.

Let’s talk more about the foundation. How has it evolved during your tenure?

When I joined the foundation as its director, it was during a time of great change and uncertainty. The foundation was formed in 2019 through the merger of two existing foundations: the 21st Century Foundation and the City College Fund. Both foundations had separate but equal mandates, and the primary mandate was to support the academic environment for students. That often led people to believe the foundations were primarily focused on providing scholarships for students, but they were actually focused on the comprehensive environment. So, navigating this merger and building our brand was a tremendous task.

Today, we are a much stronger institution, and that’s clear to see in a number of ways. For one, our board members talk about the college as if they’re actively on campus on a daily basis. They’re able to tell the stories of our students, research, and programs in a meaningful and authentic way, and I think that’s fairly unique.

The foundation also perceives itself differently than it did five years ago. Today you’ll hear staff discuss the college and the foundation as ambassadors for social justice. We have become a place of activism. It’s been an important, necessary, and exciting change.

As I mentioned earlier, our team has expanded tremendously over the past couple years. As the foundation has grown in size and assets, our commitment to raising money, stewarding funds, protecting the future of the college, and advocating for our students has only deepened. Our team has outpaced all expectations; it’s been very impressive.

The foundation is now preparing for a $1B campaign. What role does philanthropy play in the College’s future?

Federal and state funding for public universities has been trending downwards for years so we knew that philanthropy would be key to helping us rise above fluctuations in budgets. Philanthropy would provide stability and be a powerful tool in stewarding the historic nature of City College into the future.

System wide, we’re changing how we think of philanthropy. We need to understand it as an enduring and constant anchor for our sustainability and growth – and not just something we focus on once every decade. It has been great to see our community embrace this. Departments across campus are saying, “We have our own budget needs, but we also support the advancement department and its growth.” That’s language and thinking that didn’t always exist.

One final question – what advice would you share with fellow leaders?

I would encourage other leaders to delegate. When I first took on this role, I was extremely protective of my staff and their time as we were navigating substantial transitions. But my team was ready to help. So, if you have a great team like I do, learn to lean on them.

I’m a kid that grew up on welfare. So, the idea that I am now sitting in an office like this and overseeing budgets of hundreds of millions of dollars – it doesn’t always feel real to me. I wasted too much time earlier in my career trying to wrap my head around the fact that I had gotten the job. So, my second piece of advice would be to not make the same mistake I did. Don’t waste time thinking you don’t belong. You do.

British A. Robinson on Literacy and Issues of Equity

British A. Robinson, President and CEO at the Barbara Bush Foundation for Family Literacy, discusses how COVID has provided an opportunity to double down on their commitment to solve low adult literacy.

Studio in a School’s President on her vision for partnering with NYC’s public schools and her advice for fellow leaders.

David Greene, Colby College’s President, on Planning for a Strong Future During Uncertainty

Colby College’s President on leadership throughout COVID, the college’s commitment to equity, access, and their local community, and what’s top of mind for him now.