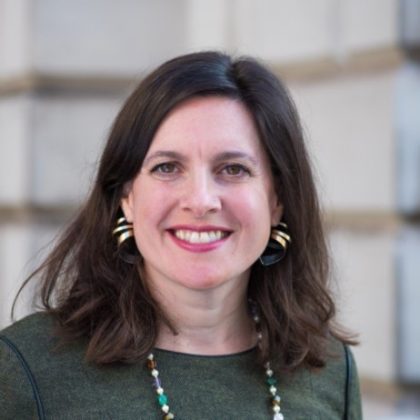 Jacob’s Pillow is pleased to announce that Lila Kanner will be joining Jacob’s Pillow as its new Chief Philanthropy Officer. She will start in her new role with the Pillow on May 23.

Kanner brings to the Pillow more than 20 years of experience in the arts and a decade in successful fundraising leadership. Most recently, she served as the Acting Director of Development at The Courtauld Institute of Art in London where she managed a development team to deliver campaigns, major gifts, membership, operations, alumni relations, and events. In her tenure at The Courtauld, she oversaw the strategy and management of the organization’s robust fundraising efforts and led the fundraising team to complete a capital campaign of more than $70M. Prior to her time at The Courtauld, Lila served as Director of Major Gifts and Strategic Initiatives at the Harvard Art Museums.

“Some of my earliest, formative art experiences are from attending Jacob’s Pillow performances, and I am thrilled to join the leadership team as Chief Philanthropy Officer at this important time,” Kanner said. I am inspired by the organization’s artistic program, mission and the ambitions of all who are part of the Pillow’s treasured local, national and international communities. I look forward to working with staff, artists, and supporters to celebrate the 90th anniversary this summer and to engaging everyone who believes in a bright second century for the Pillow.”

In her new role, Kanner will be working with the Executive and Artistic Director, the Board, and staff to advance the ambitious development goals of the Pillow. Lila will be key in strengthening the organization’s major giving and essential in the creation of a new development and stewardship plan for the future. In addition to her experience including London, Boston and New York, Lila is a Berkshire native, having graduated from Pittsfield High School and attended Pillow performances throughout her life. Lila looks forward to bringing her passion for the arts and dance to Jacob’s Pillow.

“I’m so thrilled to have such an experienced strategist and exceptional human being join our senior team,” said Jacob’s Pillow Executive and Artistic Director, Pamela Tatge. “We feel so fortunate that this graduate of Pittsfield High School and camp counselor from Chimney Corners Camp is returning to the Berkshires to assist our beloved Pillow in growing and evolving at this exciting time in our history.”

membership and individual giving, as well as alumni relations to help deliver The Courtauld’s mission to be the most critically engaged, welcoming and generous institution for the study of art in the world. Lila’s career spans more than two decades devoted to widening access to the arts and creating opportunities for artistic practice, as well as a deep commitment to inclusion, diversity, equality and access (IDEA).

Prior to The Courtauld, Lila was Director of Major Gifts and Strategic Initiatives and first Associate Director of Major Gifts at the Harvard Art Museums. At Harvard, Lila oversaw significant strands of capital and curatorial fundraising which were cornerstones of the Harvard Art Museums’ positioning for the “The Harvard Campaign”, Harvard’s multi-year, $9.62B campaign. While at Harvard she led on fundraising for exhibitions and institutional priorities including the exhibition Everywhen: The Eternal Present in Indigenous Art from Australia. Among other international cultural organizations, Lila has held positions at Artadia: The Fund for Art and Dialogue; the Fabric Workshop and Museum, an artist residency and contemporary art space; as well as at Art21: Art in the 21st Century, a television series profiling contemporary artists on PBS. Lila grew up in Pittsfield, Mass., and graduated cum laude from Wellesley College. She holds a master’s degree in Modern Art History and Curatorial Studies from Columbia University in New York.

Jacob’s Pillow is a National Historic Landmark, recipient of the National Medal of Arts, and home to America’s longest-running international dance festival, currently celebrating its 90th Anniversary Season. Jacob’s Pillow rests on the traditional lands of the Agawam, the Nipmuc, the Pocumtuc, and the Mohican and we honor their elders past, present, and future. Each Festival includes national and international dance companies and free and ticketed performances, talks, tours, classes, exhibits, events, and community programs. The School at Jacob’s Pillow, one of the field’s most prestigious professional dance training centers, encompasses the diverse disciplines of Contemporary Ballet, Contemporary, Tap, Photography, Choreography, and an annual rotating program. The Pillow also provides professional advancement opportunities across disciplines of arts administration, design, video, and production through seasonal internships and a year-round Administrative Fellows program. With growing community engagement programs, the Pillow serves as a partner and active citizen in its local community. The Pillow’s extensive Archives, open year-round to the public and online at danceinteractive.jacobspillow.org, chronicle more than a century of dance in photographs, programs, books, costumes, audiotapes, and videos. Notable artists who have created or premiered dances at the Pillow include choreographers Antony Tudor, Agnes de Mille, Alvin Ailey, Donald McKayle, Kevin McKenzie, Twyla Tharp, Ralph Lemon, Susan Marshall, Trisha Brown, Ronald K. Brown, Wally Cardona, Andrea Miller, and Trey McIntyre; performed by artists such as Mikhail Baryshnikov, Carmen de Lavallade, Mark Morris, Dame Margot Fonteyn, Edward Villella, Rasta Thomas, and hundreds of others. On March 2, 2011, President Barack Obama honored Jacob’s Pillow with a National Medal of Arts, the highest arts award given by the United States Government, making the Pillow the first dance presenting organization to receive this prestigious award. The Pillow’s Executive and Artistic Director since 2016 is Pamela Tatge. For more information, visit www.jacobspillow.org.