In this month’s At the Helm, Victoria Jones spoke with Catherine D’Amato, President and CEO at The Greater Boston Food Bank. GBFB is the largest hunger-relief organization in New England and among the largest food banks in the country. Catherine reflected on the larger issue of food insecurity in the face of the pandemic and how in her role, she has helped GBFB rise to the enormous challenge of staying ahead of the hunger curve.

Victoria: Can you start by giving us a sense of the scale of food insecurity we’re currently facing? 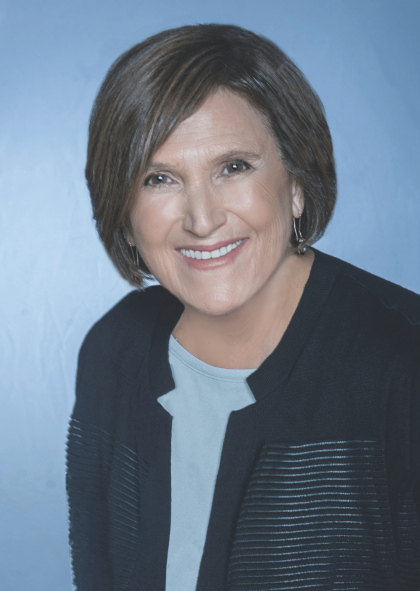 Catherine: It is enormous. In the early months of COVID, Massachusetts was the state with the fastest growing level of food insecurity across the entire nation. In our commonwealth alone, the number of people experiencing food insecurity grew from 450,000 to nearly a million in just months, and Norfolk County—where we are physically located—saw the highest growth in food insecurity among children for any county in the entire country. Contributing factors were just cascading: unemployment, loss of home, child and elder care needs, etc. And many of these people were experiencing food insecurity for the first time, which means they weren’t necessarily knowledgeable about programs like SNAP, WIC, school meals, and state-wide emergency feeding systems.

You see the gravity of the situation in how drastically our numbers changed. Our fiscal year closed at the end of September. Our goal had been to distribute 66 million pounds of food distribution. We distributed 100 million pounds. 50% of the people we’re serving now, we weren’t serving prior to March. And we don’t expect it to go away soon (as in the next couple years). It’s a critical and enduring issue.

I can only imagine the level of response that has necessitated from your organization.

The need for our services saw the greatest surge in March through June, and it truly took us that much time to figure out what we were dealing with and how to effectively respond. Like so many organizations, we had to pivot constantly, which meant dropping some things, starting others, and constantly rethinking and adapting.

Starting in April, we redeployed over 25 of our team members to focus more on immediate needs. For instance, one of our nutritionists could no longer hold food safety workshops, so she began working at a distribution site. There are many stories like this. Taking this approach meant we served better in the moment and we had no layoffs. Now, some of the redeployed staff are back to their original jobs because we have figured out how to do so much online.

And what about volunteers and all of your partners?  I know this was a big part of how you got food to the community. 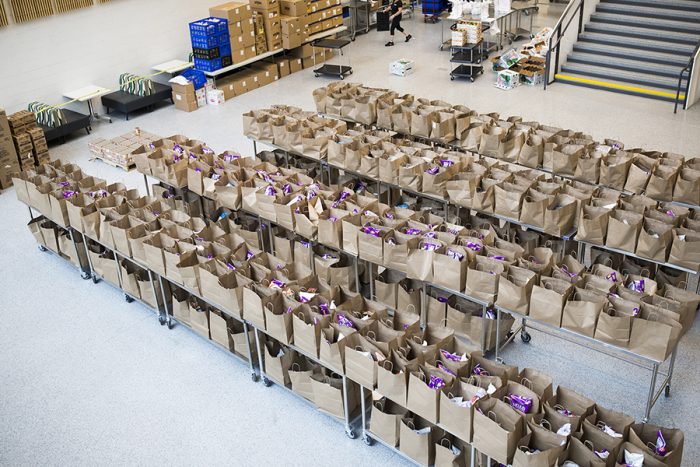 That’s right, and pretty much overnight we went from 26,000 volunteers to none. At the same time, we had major supply chain disruptions: trailers of product would never arrive, some were intercepted by FEMA, and some showed up months late. We just had to be resilient. We normally keep four to five weeks of inventory, and sometimes we came down to just days. That would keep me up at night!

The obstacles we were facing were shared by our network too. We have a strong network of nearly 600 organizations in 190 cities and towns. They, too, were rethinking their models and service delivery. I’m pleased to say only 5% of our network actually closed. We also added 30+ new organizations to our network, and these were organizations who had never worked in food before. Here is a good example of how everyone pitched in. The YMCA of Greater Boston had to cancel all of their programs, so they asked “What can we do?” We formed a partnership with them and the city of Boston, and the organization has become a major food distributor. Sector-wide, it has been moment after moment of adapting.

We’re truly not the same organization that we were a year ago – in terms of the demand for our services, our process, or the scale of our impact. In the beginning, we were incredibly scared, as most of us were. But we learned a lot. And we’ve grown our business in excess of 120% in 10 months.

I’ve always admired your ability to assess what is a good use of the Food Bank’s resources and what isn’t. How did you make decisions—and quickly—when faced with an issue as vast and unknowable as the pandemic?

It’s a great question. I think the most important thing we did was to stay very clear about what we do and what we do well. As they say, we stuck to our knitting. At the same time, we found ways to maximize the elasticity of our staff. 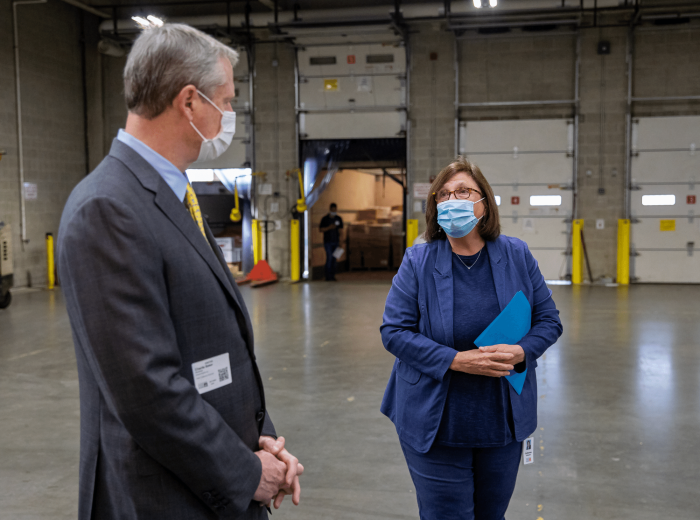 One of the first things we did was assemble a COVID response team; this was a decision we made in mid-February before we even knew what was coming – only that it was coming. Our Chief Operating Officer oversaw the team, and it was their responsibility to keep us safe, whether that meant arranging remote work situations, partnering with HR to create safely protocols, or making decisions around food acquisition and distribution. They met every day of the week, which in turn allowed me to look externally and handle matters from that position.

Another decision we made early on was to contain expenses, just in case. Even though we were having a surge of financial support and an equally big surge of requests for food. There was a lot of uncertainty and I wanted us to control what we could. We were fortunate to have Boston Consulting Group come in to do an analysis of the surge, what it meant in terms of dollars and food needed, and to help identify what our challenges would be. Their findings helped us quickly build a strategy and to keep building strategies. We became about scenario planning, which gave us urgent and immediate frameworks. And we keep evaluating them. I have also put together an informal group of external advisors—other leaders I talk to frequently. I call on them more and more frequently for insights and data. They have been invaluable.

How about as a leader – what philosophy was core to your response?

Something I have said many times is that I always want to be prepared for two things: eternal bliss and impending doom. So, let’s identify the goalposts and recognize that anything could happen in between. With this understanding, how do we protect the organization and our team?

I also adopted the State Street Corporation’s 4 Cs: care, communication, clarity and calm. Being honest about what we knew and what we didn’t, supporting each other, providing stability – it was all really important. I think this approach really helped with our interim thinking.

Did the pandemic provide you with any opportunities? Any lessons?

I think in some ways, making difficult decisions and significant changes becomes easier when times are tough. You see this in legislation all the time – just look to the millions we received to address the state commodity problem during COVID. People recognize that the trying times also present opportunities.

In terms of lessons, we saw how courageous our team and network are – through the resiliency they displayed and the trust they placed in their organizations, donors, and intuition. We were also reminded of the importance of continuous improvement – how important the cycle of process, reflection, and adjustment is. I’m a leader who continually wants to improve the mouse trap, and I know that can be challenging for my team, but they’ve embraced this approach over the past year.

We’re nearing a year since the start of the pandemic. Looking back, what are your biggest points of pride? 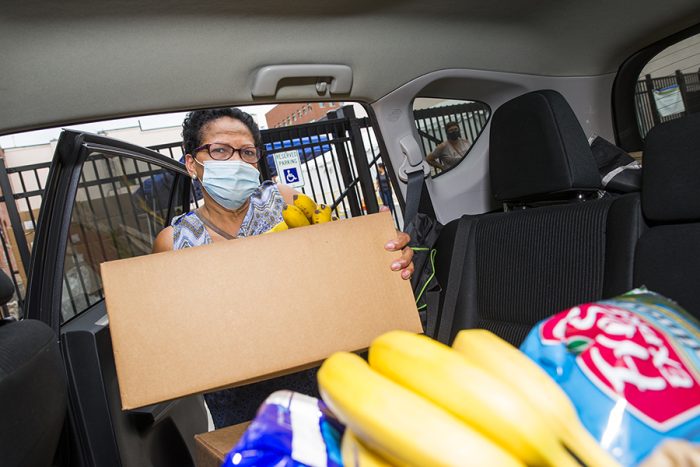 I would point again to the resiliency – that we didn’t lose people, that they stayed steady and said, “We’re here, we’ll show up.” This allowed us to have the continuity of service to our network, and most importantly, to the people experiencing food insecurity. It was humbling.

We’ve also been able to build on the existing leadership within our organization. Because staff were called upon to do more, especially as members of the COVID response team, they stepped up in ways that I don’t think we would have seen otherwise.

I’m always impressed by donors, too. The ways in which they have transformed their giving in response to the pandemic has been inspiring – and so appreciated.