In this month’s At the Helm, Victoria Jones spoke with Mindy Lubber, CEO and President at Ceres, which mobilizes the most influential companies and investors to tackle climate change. Mindy, who was recently named a Champion of the Earth by the United Nations, discussed how capital markets’ commitment to sustainability has changed in recent years – and what has to come next.

Victoria: You have been the CEO and President for over 18 years.  What brought you to Ceres? 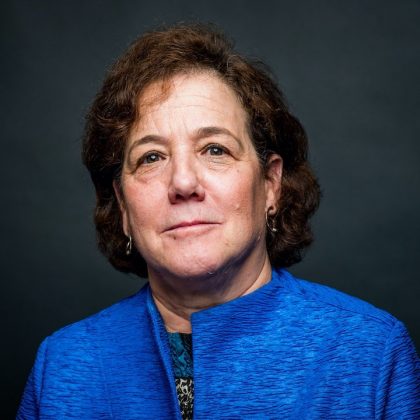 Mindy: I have spent 40 years trying to make change, in a variety of ways: through state and citizen advocacy, while running a regional office of the Environmental Protection Agency, as an environmental lawyer and litigator, and in the financial world, by running an environmental investment firm. Since graduate school, it has always been clear to me that I was on a path that I felt truly passionate about.

It was my time as a regulator that really propelled me to Ceres. I felt that rather than spending years on one lawsuit to get a single hundred-plus million-dollar settlement, which required multiple lawyers and scientists and only resulted in changing one company, what I really wanted to do was change policy and change the largest players in capital markets: the companies and the investors. It seemed to me that integrating sustainability into capital markets—and doing so in a way that made businesses and investors aware that they had to fully own the responsibility—was the key. I was fortunate to have the opportunity to join Ceres, an organization whose mission clearly aligned with this passion and belief.

Ceres was small then—only 7 or 8 staff members; today we are 150. And while we have grown substantially, the mission hasn’t changed. When Joan Bavaria founded Ceres in 1990, she did so with the vision to integrate sustainability into capital markets. Thirty years later, we have not wavered. And since I arrived at Ceres, it’s been my goal to build upon Joan’s vision.

Ceres’ mission has stayed the same, but of course the world has not. How is the work you do different today?

The world has changed radically in the past five years. In 2015, if you asked a company to commit to a net-zero carbon emissions future, they would have rolled their eyes. They would have told you it was a ‘nice’ goal but wasn’t rooted in the reality of business. Today, we have partnerships with 1,200 businesses who have committed to this exact goal, and we are working very actively with them to achieve it. It’s no longer a question of whether they should prioritize striving to more a sustainable future; instead, it’s a question of how to do so.

You can see this change in several aspects of our work. The boards of publicly traded companies are much more open to and interested in conversations around sustainability. At Ceres, we offer a program on sustainability at Berkley Law School where we train corporate board directors, and it sells out every time. The interest is there and so is the intent.

There has also been a substantial shift in the mindset of investors. We have about 197 investors in our North American network and 546 globally, and they are all thinking about climate risk and sustainability when building their portfolios. They’re asking serious questions as they dive in, “Are they doing enough? And are they prioritizing sustainability across the board?” So, it’s no longer just the ten socially responsible investment funds who are asking these questions; it’s much larger than that. I still remember our first investor summit on climate risk; Goldman Sachs didn’t understand why they were being invited. We had to clarify for them that we were discussing climate risk, not climate change – that there was financial risk at stake. It has taken years, but now investors and companies recognize their duty to analyze sustainability and climate risk, and companies recognize the need to incorporate it into their strategic planning, goals, board, supply chain, etc.

Looking forward, what do you see as the biggest challenge to continued success?

For me, it’s really sad that issues of our health and climate change have become so politicized. Politics shouldn’t matter. Our children’s future and well-being are at risk. If you saw a bus coming at a child, your political party would not matter – you would do anything you could to stop that bus. Climate change is coming at our kids like that bus, with monumental ferocity. We need to develop force that supersedes politics. That is far easier to say than to do.

But, the change in political leadership and this administration’s commitment to addressing climate change is already extraordinary – in terms of the staffing and how they are prioritizing it in their agenda. It used to be only the EPA that was thinking about and looking at issues of sustainability. Now, we work with the Securities and Exchange Commission, the Commodities Future Trading Commission, the Federal Reserve, and the Treasury Department. These offices understand that climate change is a financial risk that needs to be analyzed (just like credit or trade risk), and we need rules and regulations.

It feels like this change in mindset has happened rapidly. Is that true?

It is true that the change has come fast, but it was also 10-15 years in the making. Part of why it took as long as it did is that people needed to see firsthand evidence to fully commit. So, seeing such devastating instances of climactic change in recent years—and witnessing the resulting financial ruin, and more importantly, human death—has propelled change.

Quite honestly, thought, change is not happening fast enough. We are pushing our partners to realize that long term goals aren’t relevant on their own. There must be short and medium goals as well, and there must be transparency and disclosure with their efforts. Bold goals and pronouncements won’t cut it; it has to be about action. Taking a global perspective, it’s clear to see that Europeans understand the severity of climate change in a different way than we do here. There’s an intuition present in their mindset and lifestyle. In the U.S., we still pride ourselves on how many cars we have in the driveway, the square footage of our homes, etc. That’s not the case in Europe. Even the CEOs at the largest companies are walking or riding a bike to work. It’s a small example, but it goes to show how far we still have to go in the United States.

So, what goals are you striving for now? And what gives you hope that those goals will be achieved?

And this relates to another pressing goal – to push for regulatory change. We need to have standards and accepted rules of the game. There are many companies and individuals in the financial sector that believe issues of sustainability should be voluntary, but that’s not how you achieve consistency. We’re happy to keep pursuing change company by company in the meantime, but at the end of the day, we need a level playing field – which means policies and regulations that apply to everyone. I’m hopeful we will see that over the next four years.

I also feel hope when I see how radically the philosophy, approach, and sense of obligation of the CEOs we work with has changed. They are thinking about and prioritizing sustainable capitalism, as opposed to capitalism at any cost. We have moved away from this pernicious belief that the only thing that matters is quarterly earnings. What we are doing to battle climate risk and achieve sustainability – that is unlikely to result in profits in the first quarter. It has to be a longer view.

Has this time of COVID moved the needle on environmental action?

Definitely. I think COVID helped broaden people’s minds. It showed us what systemic change looks like by delivering a shock to our system – it took an extraordinary amount of lives and cost our economy an extraordinary amount of money. Climate risk will be even bigger. It won’t occur within one moment, but the economic impact will be devastating. Think of immigration, for instance: we will have millions of people who cannot live where they are because of climate change. We will have vast migration issues, economic problems, and loss of human life. I think COVID forced us to seriously look at our vulnerabilities. And not only have we seen how fragile and vulnerable we are as a nation, but also how interconnected we are as a global community. Climate change is like COVID in that what happens in Rio de Janeiro impacts Boston, what happens in Beijing impacts Abu Dhabi. We cannot consider ourselves a distinct, narrow slice of the pie.

Given this deepened understanding and commitment, do you think we are well-poised to achieve the 2050 goal of being carbon neutral?

Yes, I believe we will, but I also think very soon they will be understood as 2040 goals instead. The science supporting the need for this shorter timeline becomes clearer every day, and we are now working with our companies and investors to commit to 2040. I don’t want to say it will be easy, but I believe we can do it, and dealing with the consequences if we don’t strive for 2040 would be much more difficult. It will require the U.S. to commit to the strongest possible plan, which hasn’t been the approach for the past four years. And we need to recognize that we won’t solve this with one sector, community, or country. It requires global infrastructure change.

Considering the ambitious agenda you have at Ceres and the pace of growth in your organization, how do you keep ahead of the curve?

A lot of our ability to succeed rests with our team, our talent – and that is a huge challenge. So many companies and investment firms are looking for the same kind of talent we are, and they can pay them three times more. I do think what brings people to Ceres is the opportunity to feel like they are making a bigger difference. Now, none of our staff have the hubris to say that we alone at Ceres make the difference. It takes hundreds of players. But what they see at Ceres is that our strategies and our tactics are producing progress at an enormous speed – and it’s very satisfying.

I would also point out that today’s employees care about being at a mission-driven company more than ever before. There’s data to show that organizations that are driven by mission more than profit have a much easier time recruiting competitive talent, and once on-board, their employees experience greater motivation and job satisfaction.

Last question: From a personal perspective, how do you hold yourself accountable every day?

I’m not sure I’ve actually figured this out yet! I do know this. Every day before I even start to work, 20 things come up that were not on that day’s to-do list. I have had to work hard to resist the temptation to get distracted. This is not unique to me. I have no choice but to stay focused. We can’t succeed otherwise.

We spoke with Lisa Tessler about her challenges and accomplishments as Associate Vice President of Alumnae/i Engagement and Executive Director of Alumnae/i Association at Vassar College (AAVC).

Hear from leaders from a range of nonprofit sectors about their year-end giving campaigns.