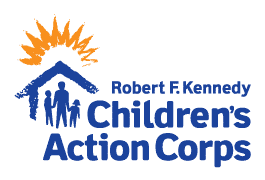 The Robert F. Kennedy Children’s Action Corps (RFKCAC) was founded in 1969 by a few young friends of Bobby Kennedy soon after his assassination to honor his legacy and his commitment to children. RFK Children’s Action Corps is a nationally recognized leader in child welfare and juvenile justice. It operates residential and community-based programs for at-risk youth and families referred primarily through the Massachusetts Departments of Social Services (DSS) and Youth Services (DYS) in seven communities across the Commonwealth. Its Detention Diversion Advocacy Program (DDAP) is a model for working with the courts to pair mentors with youth to keep them out of detention and in their communities. RFKCAC also operates a statewide adoption program called Bright Futures. Through its RFK National Resource Center for Juvenile Justice (NRC), based in Washington, D.C. and launched in 2013 with grants from the John D. and Catherine T. MacArthur Foundation, it also provides consultation, technical assistance, and training in juvenile justice reform in 36 states and territories across all regions of the U.S.

For its first 35 years, while the agency was making its name as a juvenile justice leader through its evidence-based practice model treatment plans for the children in its care, RFK Children’s Action Corps was funded largely through state contracts. But, by the early 2000s, its long-time CEO, Ed Kelley, and key board members realized that state funding alone would not provide the capital necessary to modernize its facilities or to develop and implement the new approaches and practices needed to address the growing challenges its children face. In 2004, RFK Children’s Action Corps leaders determined they needed the philanthropic support of individuals and institutions committed to the welfare of state’s most vulnerable children and their families. As it contemplated its first ever capital campaign to build a new residence hall on its Lancaster Campus, RFK Children’s Action Corps hired Development Guild to guide campaign planning and provide executive coaching and training for staff and board members. The Campaign, launched in 2006, successfully completed its first phase just prior to the severe recession of 2008, raising $1.5M. Perhaps as important, the campaign raised awareness, attracted new volunteer leadership, expanded the donor base and began to institutionalize the importance of philanthropy as a key element in the agency’s successful future.

In the ensuing 10 years, Development Guild has continued to partner with RFK Children’s Action Corps in support of its growing fundraising program and its organizational and board development efforts. From 2008 to 20011 we worked closely with RFK Children’s Action Corps leaders to reorganize and expand fundraising staff, reinvent its signature event—Embracing the Legacy—into a powerful fundraising and friend-raising evening, and strengthen its major donor efforts and board engagement in fundraising. In 2012 we partnered with the CEO, executive team, and board members to develop a strategic plan to guide the agency into the future. In 2015 we again partnered with RFK Children’s Action Corps’s leadership to plan for and launch its comprehensive New Expectations Campaign (2017 – 2019), which surpassed its $6M goal in June 2019 in its 50th Anniversary year and doubled both fundraised revenue and the agency’s donor base.

Contact us to learn more about our fundraising and campaign counsel services.