Fixing the Plane While Flying It

I don’t know about you, but I like analogies. I often find an analogy useful when attempting to wrap my head around a new concept or to figure out a challenging process.  So, when a McKinsey consultant declared that implementing a strategic plan is like following a cooking recipe, my interest was piqued. I was reminded that many a great chef assembles all necessary ingredients prior to cooking in the same way that nonprofit leaders must review budget forecasts, conduct competitor analysis, and consider any anticipated leadership transitions before creating a strategic plan. And I have been intrigued too by the similarities between sports and nonprofit management models. Just as a basketball coach can prep their players intensively but must take somewhat of a step back during the game (since most of the play is in flow), so too can a nonprofit leader take a more hands-off approach when staffed by strong, self-guided fundraising talent. Now, I could go on for a while about sports analogies, but I’ll spare you…

Instead, let me share my newest addition to my analogy repertoire: “fixing the plane while flying it.” When I heard that Silicon Valley was abuzz about the expression, I decided to try out the concept as a theme for nonprofit leadership workshops and on social media. I was amazed by the flurry and substance of interest. Here I’ve shared a handful of the responses I received from established and emerging nonprofit leaders about how “fixing the plane while flying it” can apply to their planning efforts… 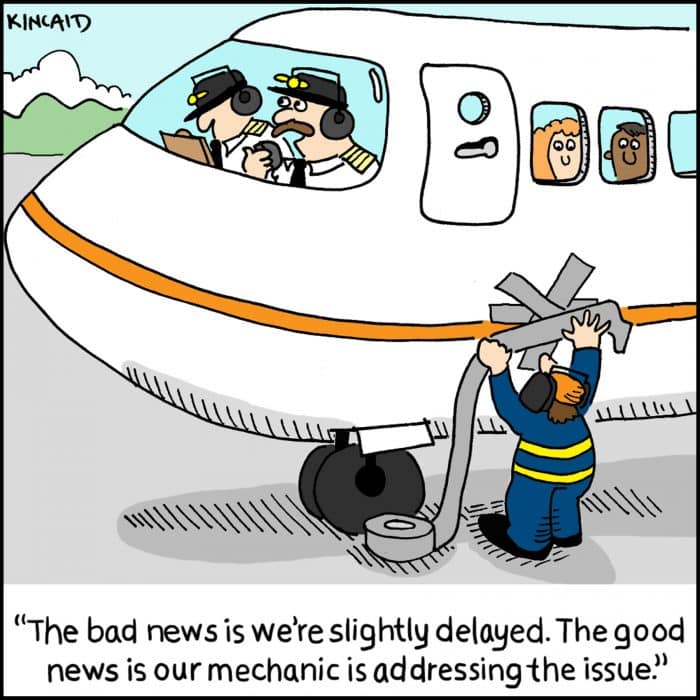 Just like inclement weather or an engine malfunction can ground a plane, so too can a nonprofit be “grounded” by change in the economy, board transitions, or unexpected staff exits. Think back to the Lehman Brothers collapse of October 2008: markets tanked, credit and cash flow froze, and hopes for the U.S. economy evaporated. Nonprofits which had already prepared emergency contingency plans were able to pause and regroup—in effect, they had their parachutes ready and were able to execute a forced landing. But the nonprofits that were not prepared shouted the “sky is falling,” and often hastily fired the wrong people and cancelled mission-critical initiatives, which they were then unable to revive during the delayed economic recovery. Think ahead now – if your organization isn’t anticipating a potential economic recession in coming years—and planning with that in mind—you may be whistling in the dark.

Flight plans often mirror the stages of campaign planning. Think about it: a flight plan begins with a destination airport, so to a campaign always has a clear goal, whether it be program outcomes, dollars raised, etc. After take-off, a plane must reach a certain altitude and achieve cruising speed, or in the case of a campaign, the level of security necessary to transition from the quiet to public phase. And finally, landing at the right time and right place is often the most dangerous and difficult stage for flying and campaigns, as its where expectations and realities must come together. To return to the 2008 example, many nonprofits that had already launched campaigns had to make the difficult decision to keep their goal but extend the deadline to ensure a better landing.

Plans are reflective of the culture and time in which they’re created. Consider the resources and goals of Amelia Earhart in her flight over the Pacific versus those of Neil Armstrong and Buzz Aldrin in their journey to the moon. The plans of nonprofit leaders today are influenced by the increased speed and applicability of technology, globalization, and the rising significance of nonprofits in the economy in a way that plans of 20 years ago were not.

Perhaps one of the most significant parallels between flying and planning is the joy both activities can hold. Whenever I have talked to pilots or read their stories, they inevitably have marveled at the wonderful experience that is flight. As Wilbur Wright once exclaimed, “There is no sport equal to that which aviators enjoy while being carried through the air on great white wings.” I think that’s a useful reminder for us all – to relish the journey itself.

I’m sure many of you have your own thoughts about what comes to mind when you hear the term “fixing the plane while flying it.” Or perhaps there are other analogies you have found helpful when facing a new challenge or tackling the planning process. If so, I invite you to email me at wweber@developmentguild.com with your thoughts—and analogies too!

Development Guild DDI partners with nonprofit leaders to drive their mission forward with fresh perspective and high impact solutions. Learn more about our executive search or our fundraising and campaign services.