The Key Ingredients to a Successful Public Campaign Launch

Our client Hebrew SeniorLife recently launched the public phase of their Age of Opportunity campaign, the largest fundraising campaign in the organization’s history. The success of the launch offers insights into how organizations can ensure an effective and impactful public phase. If your organization is currently preparing to go public, keep reading to discover strategies to help you do so…

Give careful thought to the percentage of your campaign goal that you’d like to raise before entering the public phase.

Historically, organizations went public with their campaigns when they had raised 50% of the goal. Over the last several years, this has shifted, and many organizations have chosen to remain in the quiet phase until they have reached 70-80% of the campaign goal. Hebrew SeniorLife, for instance, went public once they had raised $93M (close to 75%) toward their $125M campaign goal. Successful campaigns rely on a strong foundation of leadership and major gifts, and in many instances, your strongest prospects from years past will also be your best campaign prospects. Given this reality, the trend towards raising 70-80% before going public makes good sense.

An important aspect of the campaign goal is setting measurable revenue goals that must be achieved and reviewed during the life of the campaign. HSL is very focused and committed to this process, which proved instrumental in allowing the campaign to go public in the originally projected timeframe.

Furthermore, the public phase is an important opportunity to reach a broader donor audience. Many organizations have seen a solid increase in the number of new donors that came in during a campaign. Although many of these are donors at smaller gift levels through direct response efforts (e.g., direct mail and digital efforts, campaign microsites, etc.), they are critical to overall campaign success and expanding the donor pipeline for the future.

As we all know, crafting a solid case for support is critical. For the public phase of a campaign, it is important that you have a robust library of campaign collateral ready for distribution, including brochures, videos, summaries, etc. 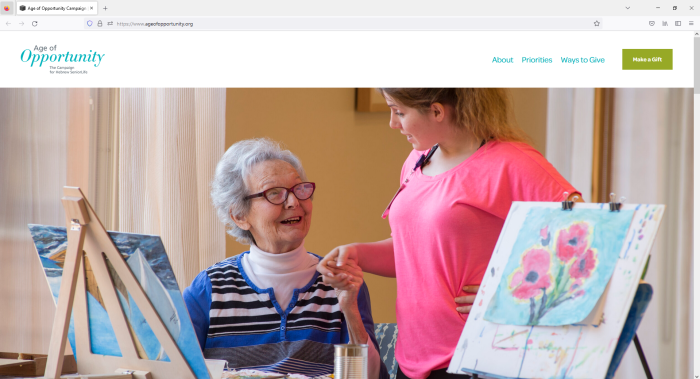 Additionally, if you have the capacity to do so, consider launching a microsite, such as HSL did: https://www.ageofopportunity.org/. A microsite can be a wonderful tool to articulate the case for support, publicly track progress towards your goal, and provide visitors with opportunities to easily learn more about and support the campaign. One note of consideration: only create a microsite if you are certain that you will have the resources and staff necessary to keep the site up to date. An outdated site can cause real harm to the campaign’s branding and progress.

Plan an event to celebrate the official public launch of the campaign. 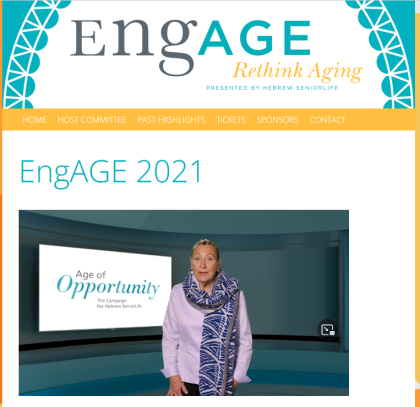 The event could take multiple forms, whether it be a reception with key stakeholders or a reimagined signature special event that you transform into a launch initiative. For instance, Hebrew SeniorLife utilized its signature annual event, EngAGE, to announce the public launch of the Age of Opportunity campaign (https://hslengage.org/event2021.php). Throughout the event, guest speakers and senior leadership highlighted the extraordinary programs and service of HSL and the need to expand philanthropic support for the Age of Opportunity campaign.

Whatever form it takes, the main purpose of the event should be to communicate the case for support, celebrate how much has been raised already, and share what you’re aiming to achieve. It’s a key forum for gaining momentum and focus.

Recognize and capitalize on the ability of a public phase to engage the greater community.

The planning, strategizing, and progress that occurs during the quiet phase of a campaign is usually more staff-driven. They are the ones crafting the case for support, engaging prospects, planning for the launch, etc. The public phase, on the other hand, offers an important opportunity to welcome the support of the broader organizational community. It is a chance to expand the engagement of Board members, donors, and volunteers to serve as ambassadors for the campaign and open doors to others who may be able to contribute.

The public launch is a valuable opportunity to not only gain support for the campaign, but when done well, to expand an organization’s visibility and highlight its impact on the broader community.

A successful campaign will have an impact long after its close. Discover how, with proper planning, your organization can ensure lasting success.

The most successful campaigns go beyond just raising dollars. Discover how a campaign can result in multiple positive outcomes if the nonprofit thinks holistically about their campaign.

Our Senior Vice President Kieran McTague reflects on the recent decline in individual giving as well as strategies small shop nonprofits can employ to grow corporate and foundation giving.